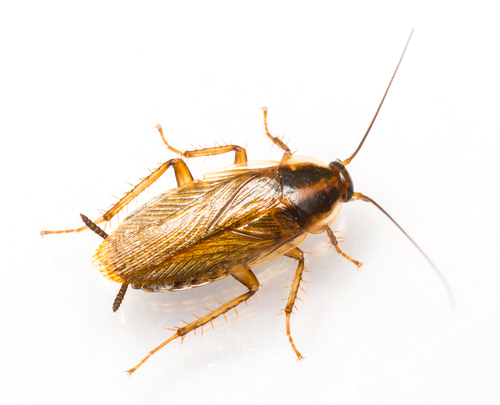 German Cockroach (Blatella Germanica) is the most common cockroach found in kitchens in homes and food service establishments. Large numbers can be found clustering together under stoves, refrigerators and dishwashers, and in wall and cabinet voids. German cockroaches usually prefer a moist environment with a relatively high degree of warmth. German cockroaches spend about 75% of their lives in hiding. Enabled by a body that’s smaller than other species, the ability and inclination to hide in tiny spaces is one reason why the German cockroach has been so successful at living with humans. Coming out of hiding to feed or to mate can be dangerous, so it’s usually done in darkness. When the roaches leave their hiding spots, they only go as far as they need to find food and mates. Their hiding places are usually within 10 feet of their food source.

Adult German cockroaches are 1/2 to 5/8 inch long and tan to light brown. Although they have fully developed wings, they do not fly. Nymphs are similar in appearance to adults except that they are smaller and lack wings. The German cockroach is best identified by its small size and by two dark parallel lines running from the back of the head to the wings.

After mating, the female cockroaches produce an egg capsule containing 30-40 eggs. 1-2 days before the eggs hatch, the female drops the capsule in a sheltered area. The development time from egg to adult takes about 100 days. The female will produce about 3-4 egg capsules in her lifetime which is about 100-200 days. In one year over 10,000 descendants can be produced, assuming two generations per year. Because of the high rate of reproduction, in very short order, the home or apartment can be totally infested with thousands of cockroaches.

Cockroaches will eat virtually any item that has nutritional value. This includes dog food, any human food items and even soap and glues. The German cockroach has been identified as a trigger of asthma for sensitive individuals especially children. Exposure to cockroach fecal material, saliva and body fragments can trigger an asthma attack. Cockroaches have been shown to carry bacteria on their bodies and are potential sources of salmonella food poisoning. Different forms of gastroenteritis (food poisoning, dysentery, diarrhea, and other illnesses) appear to be the principal diseases transmitted by German cockroaches. The organisms causing these diseases are carried on the legs and bodies of cockroaches and are deposited on food and utensils as the cockroaches forage. Cockroach excrement and cast skins also contain a number of allergens to which many people exhibit allergic responses, such as skin rashes, watery eyes and sneezing, congestion of nasal passages, and more.