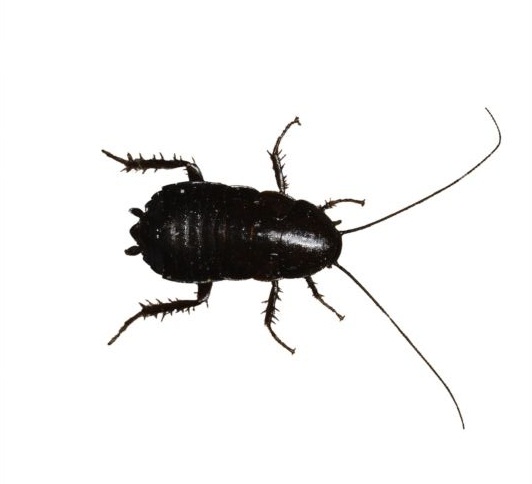 Oriental cockroaches (Blatta orientalis) are often called water bugs because of their preference for dark, damp, and cool areas such as those under sinks and washing machines, and in basements. This species, which is less wary and more sluggish than the others, is of concern because it often travels through sewer pipes and lives on filth. The oriental cockroach tends to travel somewhat more slowly than other species. They are active year-round.

Adult Oriental cockroaches are about one inch in length. Both male and female adults are very dark brown, nearly black their bodies usually have a somewhat greasy sheen. Females have small, functionless, rudimentary wing pads and broader, heavier bodies. Males have wings that cover only about three-quarters of their abdomen. Males are apparently unable to fly.

The Oriental cockroach has three developmental stages egg, nymph, and adult. Eggs are laid in capsules, which the female carries for about 30 hours and then drops onto a protected surface near a food supply. The female does not glue the egg capsule to the surface. Females produce an average of eight capsules, each containing 16 eggs that hatch in about 60 days under room temperature conditions. The life span of an adult female is 5 to 26 weeks with approximately 200 offspring. Unlike the other house-infesting species, the Oriental cockroach generally has a seasonal developmental cycle. The peak number of adults usually appears in late spring or early summer. By late summer and early fall, this number has become quite low, owing to natural mortality and the hatching of nymphs. Nymphs and adults have similar habits and are found with decaying organic matter indoors and outdoors.

Oriental cockroaches prefer dark, moist areas such as under porches, sewers, drains, crawl spaces, dark, damp basements, and floor drains. They can be found outdoors in abandoned cisterns and water valve pits; in yards; beneath leaves; in bark mulch around shrubs, flowers, and foundations; in dumps, stone walls, and crawl spaces; and in garbage and trash dumps and trash chutes. Both nymphs and adults are sluggish and are usually situated at or below ground level indoors. They are seldom found on walls, in high cupboards, or in the upper floors of buildings. At times large numbers occur in one great mass around leaks in the basement or crawl space areas of homes. Oriental cockroaches are generally found outdoors during warm weather, but in periods of drought there may be considerable movement into structures, apparently in search of higher humidity. They may enter the home in food packages and laundry, or merely come in under the door or through air ducts, garbage chutes, or ventilators. Oriental cockroaches can be harder to get rid of than other roaches. Any area that has a high humidity and a cool temperature should be examined. Crawl spaces, basements, and kitchen and bathroom plumbing can be inspected for dead roaches, egg cases, and fecal smears. Also, any spider webs in these locations can be inspected for cockroach remains.