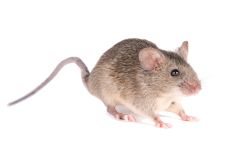 A small mouse, with soft brown or black fur with lighter under parts (but not white like the Deer Mouse). The long, slender tails and large round ears do not have fur. The eyes are large, black and beady. The whiskers are long. Those that live closely alongside humans may be darker and have longer tails than wilder varieties.

They are from 2.5 to 4 inches in length (not including their tail, which can be up to half of their total length). They weigh up to 1 ounce.

Litter size average 5 with multiple litters a year. The young stay with their mother for 21 days. Mating occurs year round, but is more frequent during warmer temperatures. Wild mice tend to breed from April to September.

Found wherever humans are, houses, barns, garages, but also fields and wooded areas. The wild variety will inhabit cracks and crevices in rocks or rock walls or dig complex tunnels in the ground. Tunnels will contain several rooms, exits and a nesting site. In homes, mice may construct nests within walls. Wild mice concentrate on seeds, roots, and other plant material. Some insects and carrion may also be eaten. Those that live with humans tend to feed on human food or trash and human made-materials. The wild variety will store food in a cache, but those that live with humans may not need to.