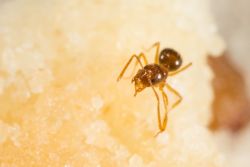 The crazy ant occurs in large numbers in homes or out of doors. Ants of this species often forage long distances away from their nests, so nests are often difficult to control. Its common name arises from its characteristic erratic and rapid movement, and habit of not following trails as often as other ants.

The crazy ant is an agricultural and household pest in most tropical and subtropical areas, and is a pervasive indoor pest in temperate areas. It has the ability to successfully survive in highly disturbed and artificial areas, including ships at sea. Since it can live indoors with humans, there is no limit to the latitude where it can exist. The ant is about 0.125 in (3.2 mm) long. It is covered with reddish-brown hairs.

Colonies of crazy ants are moderate to very populous. Colonies may grow sexual at any time of the year in warmer regions, especially in the warm rainy months of May through September. On warm, humid evenings, large numbers of males gather outside nest entrances and may mill about excitedly. Workers patrol vegetation and other structures nearby. Periodically, a wingless queen emerges. Wings of queens are removed while still callow. Males were never observed to fly or use their wings in any way. However, in several cases it has been observed that males frequently appear at lights.

They tend aphids for honeydew, feed on small insects and vertebrates, and forage on plants, especially for sweet materials. The ants appear to prefer the warmth and moisture of the coast. The crazy ant is highly adaptable. The crazy ant often nests some distance away from its foraging area. It nests in such places as trash, refuse, cavities in plants and trees, rotten wood, and in soil