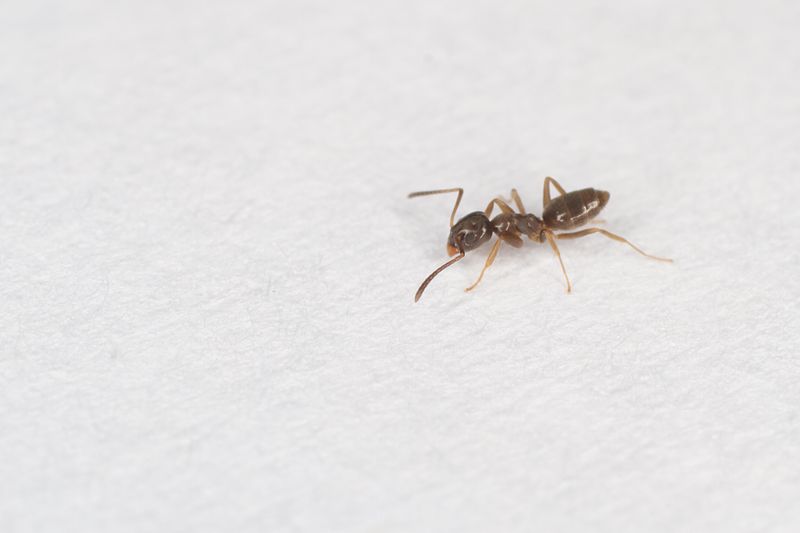 The odorous house ant is native to most of the entire United States ranging from Canada into Mexico. These ants feed on many different items including most items found in homes but apparently prefer to feed on those high in sugars. The odorous house ant frequently wanders into structures for the combination of warm, moist spaces and sugar food. Due to their wide-ranging diet, the pests are capable of surviving in a variety of environments and situations also the high adaptability of the insects makes them particularly bothersome and invasive.
Photo attribution link: By Brian Gratwicke (Flickr) [CC BY 2.0 (http://creativecommons.org/licenses/by/2.0)], via Wikimedia Commons

Workers are 1/16 to 1/8 inch (2.4-3.3 mm) long and monomorphic. The body varies in color from brown to black, antenna is 12-segmented without a club, thorax is uneven, and pedicel has one hidden node.

Odorous house ants can develop extremely large colonies but tend to maintain colonies of only several thousand workers with many queens. Winged reproductives appear in May through July. Workers are very active and move rapidly in single files.

They mostly prefer sweets but will also feed on dead insects and grease. Nests are typically found outside under rocks and boards. Colonies are from hundreds to many thousands of individuals in size. Odorous house ants will also nest indoors near sources of moisture and warmth, in voids, but also in termite-damaged wood. Their ability to feed on many types of food brings them into conflict with us when they contaminate stored products in the pantry.