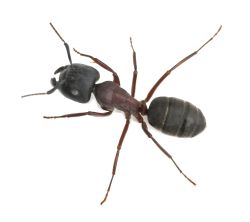 The black carpenter ant is a common invader of homes. In their natural habitat, carpenter ants aid in the decomposition of dead, decaying trees. They normally nest in logs, stumps, and hollow trees. However, the large, dark colored workers often invade homes in search of food. These ants seldom tunnel into dry, sound wood, but they may excavate moist, rotting wood and other soft materials ,such as foamed plastic to make satellite nests. Rarely will the expansion of a nest into a building’s wooden timbers cause structural damage. Homes built in wooded areas are especially subject to infestation.

Workers are wingless, dark shiny brown to black in color, and 1/4 to 1/2 inch in length. They may be seen crawling around inside a residence. Winged reproductive forms resemble workers in color and shape but are up to 3/4 inch long. The body is constricted between the thorax and the abdomen. The antennae are elbowed. The front wing of a reproductive ant is longer than the hind wing.

A carpenter ant colony has one wingless queen and many sterile, wingless, female workers. It also has white, legless larvae and, at certain times, winged females and males. The eggs are white and the pupae cocoons are tan. Usually, a colony does not produce winged males and queens until it is several years old and has about 2,000 to 3,000 workers. A new queen lays fifteen to twenty eggs, which produce the first brood of offspring. The whitish, soft-bodied, legless larvae later become the sterile female workers. Development from egg to worker requires a minimum of about 60 days. The workers of the first brood are small because they are nourished only from food reserves that are stored in the queen’s body. Once these workers become adults, the queen’s only function is to lay eggs. The adult workers forage for food, enlarge the nest, and feed and care for the queen and subsequent larvae

Approximately 200 to 400 winged ants develop in the summer, remain in the nest through the winter, and leave the nest the following spring or early summer. The ants are inactive during the winter. They will be active, however, if a nest is located in a heated portion of a building. Winged males and females emerge from established colonies on warm days in the spring and early summer. Mating occurs during a brief flight, after which the male dies, and the female removes her wings and searches for a suitable nesting site. The nest is usually located in a cavity in the soft, moist, decaying wood. They eat dead insects and other small invertebrates as well as the honeydew secreted by aphids and scale insects. They regurgitate this food and feed the larvae and the queen. Workers of succeeding broods are larger because the foraging workers feed them.