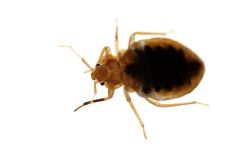 Bed bugs are parasitic insects of the cimicid family that feed exclusively on blood. The common bed bugs are the best known as they prefer to feed on human blood. The name "bed bug" derives from the preferred habitat of warm houses and especially near or inside beds and bedding or other areas around the house. Bed bugs are mainly active at night, but are not exclusively nocturnal. They usually feed on their hosts without being noticed. A number of adverse health effects may result from bed bug bites, including skin rashes, psychological effects, and allergic symptoms. Bed bugs are not known to transmit any pathogens as disease vectors. Certain signs and symptoms suggest the presence of bed bugs and finding the adult insects confirms the diagnosis. Bed bugs have been known as human parasites for thousands of years. They are potential to contaminate food with bacteria and other disease-producing organisms.

Bed bugs are small, brownish, flattened insects that feed solely on blood . Although the common bed bug prefers feeding on humans, it will also bite other warm-blooded animals, including dogs, cats, birds and rodents. It has done so since ancient times; bed bugs are mentioned in medieval European texts and classical Greek writings back to the time of Aristotle.

Adult bed bugs are about 3/16” long and reddish-brown, with oval-shaped, flattened bodies. The immature bed bugs (nymphs) resemble the adults, but are smaller and lighter in color. Bed bugs do not fly, and they don’t jump like fleas do but they can crawl rapidly over floors, walls, ceilings and other surfaces.

Adult females lay their eggs in secluded places, depositing 1, 2 or more eggs per day, potentially hundreds during their lifetime. The eggs are tiny (about the size of a dust spec), whitish and hard to see without magnification, especially on light-colored surfaces. When first laid, the eggs are sticky, causing them to adhere to surfaces. At room temperatures, bed bug eggs hatch in about a week. Newly emerged nymphs are straw-colored and no bigger than a pinhead. As bed bugs grow they molt, shedding their skin five times before reaching maturity. A blood meal is needed between each successive molt. Adult females also must feed in order to lay eggs. Under favorable conditions (70-80°F), the bugs can mature fully in as little as a month, producing multiple generations per year. Cooler temperatures or limited access to blood prolong the development time.

Bed bugs are very resilient. Nymphs and adults can persist months without feeding which is unusual for most insects. The ability to survive without a blood meal is longer at cooler temperatures potentially up to a year or longer at 55°F or less. In temperature-controlled buildings, a more typical duration is about 2 to 6 months. Consequently, it is usually impractical to leave buildings unoccupied in hopes of ‘starving out’ an infestation. When infested dwellings such as apartments are vacated, bed bugs often disperse to nearby units, or reduce their activity until the unit is reoccupied. Bed bugs are active mainly at night. Characteristically, these areas are marked by dark spotting and staining, which is the dried excrement of the bugs. Also present will be hatched and un-hatched eggs, the tannish shed skins of maturing nymphs, and the bugs themselves. Another possible sign are rusty or reddish smears on bed sheets or mattresses from crushed engorged bed bugs. Although it’s often stated that bed bugs have a telltale buggy odor, the smell is seldom evident except in extreme infestations and should not be relied upon for detection. Bed bugs prefer to hide close to where they feed, but if necessary will crawl several feet to obtain a meal. Initially the bugs tend to be situated around sleeping areas, i.e., beds, couches and recliners. If infestations are allowed to persist, they also may disperse to other locations within the dwelling making elimination more difficult. During the daytime, they prefer to hide close to where people sleep. Their flattened bodies enable them to fit into tiny crevices especially those associated with mattresses, box springs, bed frames and headboards. Bed bugs do not have nests like ants or bees, but do tend to congregate in habitual hiding places.