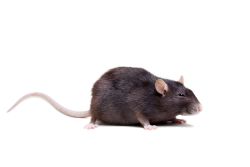 A relatively large member of the mouse family and a medium-sized rat, It has fine black hair that is lighter underneath. Color patterns may exist in isolated populations or within those bred as pets. The ears are large (larger than the Norway rat), rounded and naked. The tail is naked and longer than the length of the body.

They are averaging 7 inches in length (not including their tail, which is always longer than their body) and weighs roughly 7 ounces. Males are larger than females. They are generally smaller than the Norway rat.

Black rats produce 5–10 young per litter, and have between 3–6 litters a year. The gestation period is about 3 weeks. It only takes between 12–16 weeks from birth for them to reach sexual maturity. The life cycle of rats is around a year to eighteen months, during which time, the female will typically breed up to six times, with the average litter being seven or eight. Breeding occurs throughout the year, but especially in the spring or autumn"

Black rats inhabit the same spaces humans do and pretty much anywhere that offers food and shelter. High reaching places are often preferred, such as trees, attics, roofs and top floors. In the wild, they will generally stick to wooded areas. Nests are made from grass, leaves, twigs, paper, or anything they can find, usually within walls, in trees, or sometimes in burrows. Rats are opportunistic foragers. Fruits, grain and other plant material. They will also feed on insects and their larvae when available. Those that live with humans tend to feed on human food and trash as well as livestock feed.