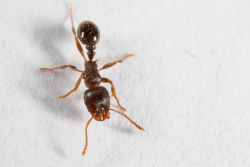 Pavement ants get their name because of their habit to nest under sidewalks, driveways, and building foundations. During the winter, pavement ants may nest inside structures near a heat source. A mound of displaced soil near a paved area is probably a sign of pavement ants. Very often they build their nests along sides of garages and houses, and parts of houses which are constructed on concrete slabs. They may enter homes and businesses through small openings windows and doors, basement walls, or concrete floors. During the winter months, they can be found indoors as they are forced to look for food and water.

The pavement ant workers are about 2.5–4 mm long and vary in color from dark brown to black, with parallel furrows or lines on the head and thorax. The pedicel, which connects the thorax and abdomen, has two segments. The posterior thorax has two spines that project upward to the rear, and they carry a stinger in the last abdominal segment. The swarmers or reproductive ants are winged, about twice the size of the workers, and also have a furrowed head and thorax. The spines are evident on the females but absent on the males.

Little information is available on pavement ant colony biology. Most information is gleaned from the observations of ant behavior aboveground. Winged reproductive ants typically swarm in the spring but have been known to emerge any time of the year in heated structures. It is not uncommon to see swarming in late fall and into February even in colder climates. After emergence, the ants mate and the queens burrow into the soil to begin laying eggs. Worker ants develop over a two to three month period.

Pavement ants are trailing ants and feed on a variety of foods, including dead insects, greasy foods, seeds, and sweets. They may forage as much as 9 meters from their nest. The reproductive queens and drones have wings. They are commonly seen in the late spring and early summer months on their nuptial flights, both drones and new queens looking for mates. Rival colonies can often be spotted amidst long battles along sidewalks, driveways, and other open areas as they each attempt to expand or defend their territories.