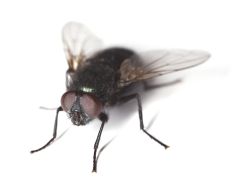 Blow flies are so-called because the larvae develop inside the bodies of dead animals, causing the carrion to have a bloated appearance. They also are attracted to garbage. Blow flies are about the size of house flies or slightly larger. They have been called “bottle flies” because their shiny blue and green color resemble like colored glass bottles, though some species are shiny black or bronze. Large numbers of these flies indoors usually indicates the presence of a dead animal such as a mouse or bird inside the structure.

Eggs hatch in 0 to 18 hours because partial development may occur within the female. Breeds in mostly meat derived substances, sometimes cheese, or common pest of dead rodents/birds etc.

Bluebottle flies/Blow flies can often be seen hovering around garbage cans. These scavengers are attracted to pet feces and dead animals and as such are known carriers of disease. Bluebottle fly adults feed on nectar, while the larvae feed on carcasses of dead animals. Adults are also pollinators to some flowers with strong odor.