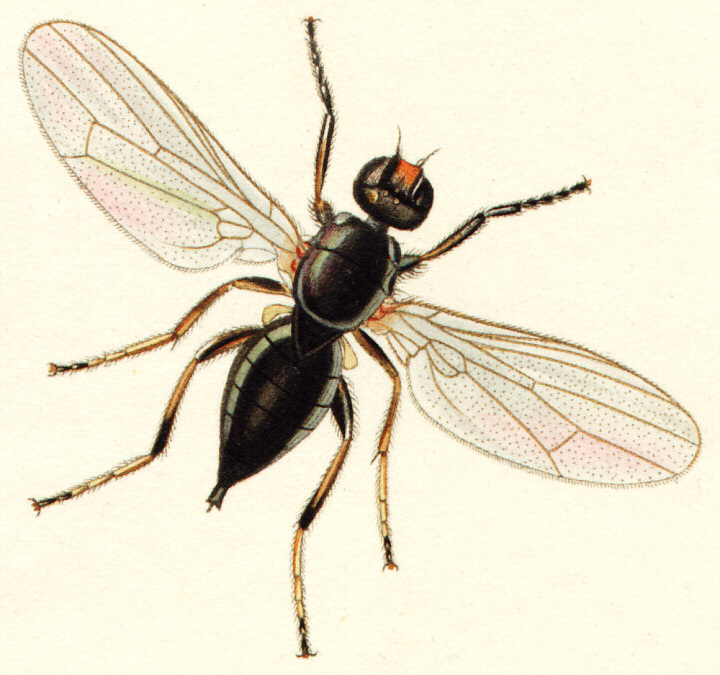 The cheese skipper, Piophila casei (Linnaeus), sometimes called the ham skipper, is a member of the "skipper fly" family (Piophilidae). These flies receive their name due to the unusual ability of the larvae to propel themselves through the air. The flies are detritivores, feeding on decaying matter, cheese fly is a species of fly known for infesting human foodstuffs. Usually feed on overripe and moldy cheese, and slightly salted or putrid-smelling meats, such as ham, bacon, and beef.

Are small metallic-colored flies, usually black/bluish-black with bronze-colored tints on the head, thorax, and abdomen, with reddish-brown eyes and iridescent wings. Cheese skipper adults are usually about half the size of a common house fly. Males are 4.4-4.5 mm from the tip of the head to the tip of the wings, whereas females are slightly larger, usually measuring 5.0-5.2 mm. The dominant color of both males and females is a metallic black-bronze. The palps and proboscis are usually covered with bristles, and the antennae are short. The compound eyes found on both sexes are usually bare and red in color. The thorax has distinct rows of setae, and long setae are also found on the sides of the insect. The legs are covered with short spines and often have both yellow and brown colorations. The wings are iridescent and nearly overlap when resting. Halteres, rudimentary second wings, are typically a pale yellow color

The complete life cycle of a cheese skipper in appropriate nourishment and temperature conditions can be as short as 12 days. However, the typical life cycle is as follows: Egg 23 to 54 hours - Larva 14 days - Pupa 12 days - Adult 3 to 7 days.

Cheese skippers usually feed on overripe (three or more months old) and moldy cheese, and slightly salted or putrid-smelling meats, such as ham, bacon, and beef. Larvae are typically found on high-protein substrates ranging from salted beef to smoked fish and animal carcasses. Signs of cheese skippers in foods include the presence of whitish-colored eggshells as well as small grooves or creases found in the surface of cheeses made by first-instar larvae. Infested cheeses will usually have soft or sunken areas, and meats may have a shiny grease-like liquid drip from infested areas. Eggs, larvae, pupae, and adults are found near or on infested materials.