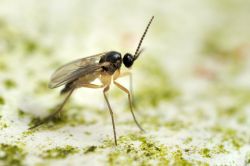 Gnats present in soil are typically the fungus gnats. Because larvae remain within soil and near the bottom of affected plants, fungus gnat infestations are difficult to identify before they have caused considerable damage. Fungus gnat larvae often go unnoticed, as they remain near the roots of affected plants. Adult fungus gnats appear similar to small flies and many times are not identified as being destructive.

Most species are black in color and very small (less than 1/16 inch) in size, although a few species may reach 1/4 inch long. Key identifying characteristics include long legs and long thin wings.

Females lay small, yellowish-white eggs on the surface of moist soil. The larvae that hatch are legless, with white or transparent bodies and shiny black heads. Fully grown larvae measure approximately 1/4 inch in length. They live within soil and eventually develop into pupae. Pupae are initially white, although they darken as they mature.

Some fungus gnat larvae are known for their propensity to feed on the roots and lower stem tissues of plants. These feeding habits stunt and might kill affected plants. They can cause severe damages both to houseplants or greenhouses. Young plants are highly susceptible to fungus gnat damage.