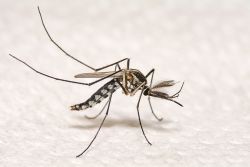 Aedes aegypti, the yellow fever mosquito, is a mosquito that can be recognized by white markings on its legs and a marking in the form of a lyre on the upper surface of the thorax. The mosquito is now found in tropical and subtropical regions throughout the world. The average wing length of female Aedes aegypti mosquitoes varies greatly.

The adult yellow fever mosquito is a small to medium-sized mosquito, approximately 4 to 7 millimeters. To the unaided eye, adult yellow fever mosquitoes resemble the Asian tiger mosquito with a slight difference in size and thorax patterns. Aedes aegypti adults have white scales on the dorsal (top) surface of the thorax that form the shape of a violin or lyre, while adult albopictus have a white stripe down the middle of the top of the thorax. Each tarsal segment of the hind legs possesses white basal bands, forming what appear to be stripes. The abdomen is generally dark brown to black, but also may possess white scales. Females are larger than males, and can be distinguished by small palps tipped with silver or white scales. Males have plumose antennae, whereas females have sparse short hairs. When viewed under a microscope, male mouthparts are modified for nectar feeding, and female mouthparts are modified for blood feeding.

About three days after feeding on blood, the female lays her eggs inside a container just above the water line. Eggs are laid over a period of several days, are resistant to drying, and can survive for periods of six or more months. When the container is refilled with water, the eggs hatch into larvae. The entire life cycle (i.e., from egg to adult) can occur in as little as 7-8 days. The life span for adult mosquitoes is around three weeks.

This mosquito bites primarily during the day, both indoors and outdoors. They are most active for approximately two hours after sunrise and several hours before sunset, but can bite at night in well-lit areas. Aedes aegypti can bite people without being noticed. This mosquito prefers biting people but it also bites dogs and other domestic animals, mostly mammals.