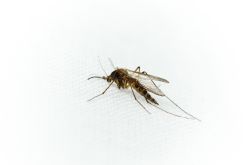 Culex pipiens is commonly referred to as the House Mosquito. It is the main vector, or carrier, of St. Louis Encephaliti, West Nile Virus, Western Equine Encephalitis, Heartworm in dogs, and bird malaria.

Is a medium-sized mosquito and is brown in color. The body is about 3.96 to 4.25 mm long. While the main body is brown, the proboscis, thorax, wings, and tarsi are darker than the rest of the body. The head is light brown with the lightest portion in the center. The antennae and the proboscis are about the same length, but in some cases, the antennae are slightly shorter than the proboscis. The flagellum has 13 segments that may have few or no scales. The scales of the thorax are narrow and curved. The abdomen has pale, narrow, rounded bands on the basal side of each tergite. Males can be differentiated from females in having large palps and feathery antennae

Adults fly at night to nutrient-rich standing water to lay eggs. The larvae feed on organic material in the water and require between five to eight days to complete their development at 86°F. The larvae pass through four larval instars, and towards the end of the fourth instar, they stop eating and undergo moulting to give rise to pupae. After 36 hours at 80°F, adults emerge. The exact timing of development can vary depending on temperature. Both males and females take sugar meals from plants. But after mating, the female seeks a blood meal on mammals and birds. Ingested blood is necessary for egg development. A single female can lay up to five rafts of eggs in a lifetime, with each raft containing thousands of eggs. The exact number varies depending on climatic conditions.

Mosquitoes main target have been birds, the House mosquito is now targeting humans and mammals on a regular basis. The mosquito bites an infected bird and then goes to another blood meal host, whether a human or another bird, and bites that new victim, injecting it with the virus from the original bird. This process has helped to spread diseases from bird to bird, and more recently, from bird to humans and other mammals. Culex pipiens can therefore be considered a “bridge” vector as it transmits viruses between birds and mammals.