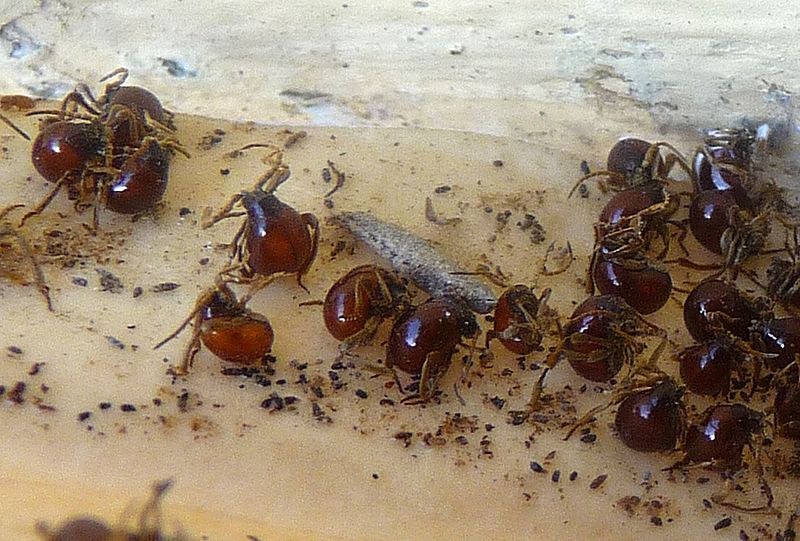 They are called spider beetles because they look somewhat like small spiders (or large mites) due to their long legs and relatively large, rounded abdomens. Spider beetles prefer to forage at night or in dark locations and are consequently seldom seen. They also prefer damp locations and will readily feed on foodstuffs spoiled by moisture. They can be found within walls and attics, in the cracks of wooden floors in granaries, bakeries, and such, and in the nests of birds and rodents. They can be active at temperatures below freezing and will have from one to two generations per year depending on the ambient temperature and relative humidity. There are several varieties of spider beetles the American spider beetle, the white marked spider beetle, and the smooth spider beetle. These beetles are not as common as others, but if you have them, they’ll most likely be found in any places you store food. Food contamination is the biggest worry with these pests.

Adult are 1/32"-1/8" long. They are shiny red-brown to black. The body is hairless, and lacks the general spider beetles characteristic restriction at the waist.

Females lay up to 120 eggs either singly or in batches during early summer. The eggs hatch within 16 days, and remain in the larval stage for up to 6 weeks. Adults emerge after 20-30 days of the pupal stage and may live for up to 12 months. At the optimum temperature for development (91°F) it takes about 45 days for the life cycle to be complete.

Shiny spider beetles are tolerant of cool conditions and can stay alive for long periods without food. If disturbed, they will act as if dead.