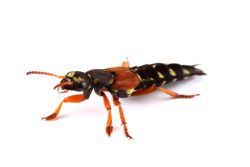 Rove beetles are commonly found on the soil surface in a variety of habitats. Their very short wing covers combined with a habit of raising their 'tails' when running or disturbed has left some people confusing them with small scorpions. They also have a similar appearance to earwigs, but lack the large 'pincers' that earwigs have on their rear ends. They come in a variety of sizes and colors and are primarily predatory, but a few parasitic on insects such as onion maggot

Eggs are laid singly on moist substances and typically develop in 3–19 days. The larvae pass through two stages before reaching adulthood. Adults are most common in spring and early summer.

They are common in habitats with large numbers of fly larvae (e.g. decaying fruit or seaweed, compost). The larvae and adults are general predators of small insects and other arthropods, including pests of crops.