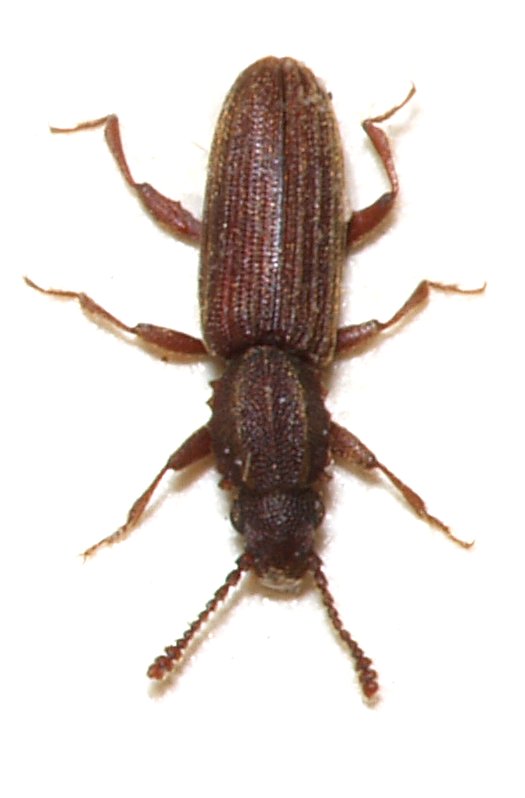 Merchant grain beetles are found in pantries or in food processing areas or warehouses. Merchant grain beetles are found more often in foods that are high in oils and fats, such as peanuts or birdseed. Other foods attacked include rice, cereals, dried fruits, breakfast foods, grain meals, sugar, chocolate, drugs, pastas and tobacco. Its varied food preferences make it one of the most commonly encountered stored product beetles in retail food stores, warehouses and homes. In unheated grain facilities in northern states, breeding ceases at the onset of cold weather. They have been known to invade every package or food stored near an infested food product. Infestations, therefore, are often widespread throughout a room or area. The merchant grain beetle can fly, but the saw-toothed grain beetle cannot.

The adult beetle is dark brown. Length is approximately 2.5mm to 3mm. It has a slender, flattened body. The adult can fly (although it rarely does).

The female lays about 300 eggs in her lifetime. Eggs are dropped loosely among grain kernels or tucked into a crevice in a kernel. The tiny eggs are slender and white, and hatch in three to five days when environmental conditions are optimal. The larvae emerge and crawl freely about the grain to feed on broken kernels. Larger larvae may tunnel into kernels to feed. Total development from egg to adult requires about three to four weeks.

Merchant grain beetles are found in pantries or in food processing areas or warehouses. Merchant Grain Beetle is a pest species found feeding in nuts, seeds, biscuits, dried fruit, grain and various other food products. The beetles can chew through sealed packaging such as cardboard boxes, plastic bags and foil wrappings. Merchant grain beetles can infest stored food products and can contaminate food.