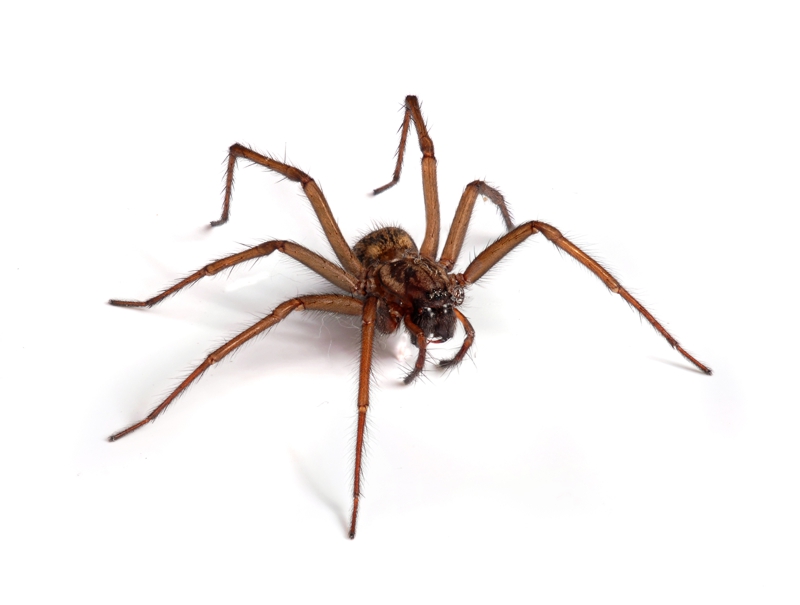 There are many different types of spiders that live all over USA and there are 39 different species we meet in New York in practically every type of habitat. They come in colors including black, brown, white, gray, red, yellow, green, and orange. Most spiders live for about a year. Spiders range in size from barely visible to many inches across. Spiders are arachnids and not insects. Young spiders are often cannibals, they will eat each other, and females often eat the male after mating. Spiders are meat-eaters and most of them eat insects, like moths and crickets, but the larger spiders, like tarantulas, could also eat small animals.

All spiders have eight legs each leg has 2 to 3 tiny claws at the end. They have a two-part body and strong jaws usually with poisonous fangs. They have a hard exoskeleton and not an internal skeleton.

After mating with a male, the female spider produces an egg sac that can contain up to a thousand tiny spider eggs. The egg sac is made of silk, and the color varies from species to species. In some species, the female spider carries the egg sac on her spinnerets or in her jaws until the eggs hatch. In other species, the egg sac is hidden under a rock, attached to a plant stalk, or encased in a web. Tiny spiderlings hatch from the eggs - they look like tiny versions of an adult spider. Some spiderlings are leaven on their own and receive no care from their mother. Other spiders climb onto their mother's back after hatching, where she feeds them. In some species, the mother dies when the young are ready to go off on their own, and the spiderlings eat her carcass.

Spiders produce silk in abdominal glands called spinnerets which they use to make webs and traps for catching prey, shelter, life lines, cocoons, and more. The tips of the spider's legs are oily, this oil keeps them from getting trapped in their own webs. Weight for weight, spider's silk is stronger than steel. House spider webs are irregularly shaped and can be located in various places within a home, including windows, ceiling corners and above or beneath fixtures. The presence of common house spiders is typically characterized by the formation of cobwebs. These silken thread structures can be found throughout infested homes. This abundance of empty webs is caused by the common house spider’s propensity to spin webs in various locations until it finds the most suitable place to catch prey. Webs are designed as trapping mechanisms and are funnel-shaped, with the narrow end acting as a den for the arachnid. Any contact made with the web produces vibrations throughout the strand, signaling to the common house spider that prey is present. Although common house spiders feed primarily on insects, they may also consume larger spiders, scorpions, rodents and small reptiles.